Several months ago, Zach asked me if I knew Sheriff Kevin Torgerson. He was surprised to know that I have known Kevin for many years. Every day that Zach has seen me over the past few months he’s continued to tell me he wanted to meet Sheriff Torgerson. I decided to email Kevin and ask if he would be willing to meet with Zach. No surprise at all, he was more than happy to come to the Cardinal office and meet with him. We surprised Zach with a visit and it couldn’t have gone any better. He got to tour Kevin’s squad car, sound the sirens, look at the flashing lights and of course sit in the car too! After taking some time to check out the squad car he brought Kevin into the Cardinal office where Kevin sat in an office with Zach and heard all about the cars that Zach likes. He was also pretty excited to tell Kevin that he knew that he had visited his PD’s (Kevin Strain) kindergarten class years ago! He was pretty excited that Kevin even took a selfie with him! Since the day he met him he continues to tell everyone what a nice guy Kevin is.  – Bandi 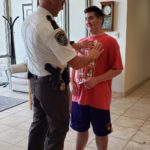 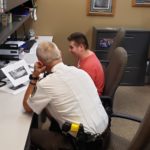 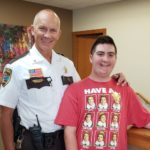